If you are looking for customized cleaning services, diligent domestic engineers, and a flawlessly clean home,
look no further than A+ Maid4Cleaning Inc. There are at least 350 million types of algae, most of which are found in oceans. However, many homes located in humid climates are continually fighting fungus and algae growth. Algae are usually deep green and slippery to touch. Since it doesn’t grow like the common weed, it does not have any roots or stems. Instead, it spreads by attaching and clinging itself to hard surfaces.

Green alga begins to grow on concrete and cement when the surface is relatively moist and shaded most of the day. As long as the conditions are damp, you will at some point have to look for ways to remove algae from surfaces including concrete patios, basement floors, and walls in your home.

Even though it does not cause any permanent damage to the structure’s stability, it can be troublesome if left untreated. Also, since the growth can be somewhat slippery, it can become a safety hazard when left to manifest. It can also cause permanent discoloration on the concrete.

Before you start using chemicals that might be harmful to you and the environment, try cleaning the algae off your walkway using boiling water, especially if the seaweed is growing near grass and other plants. Get a bucket full of boiling water and carefully pour it over the green surface. Next, take a stiff brush and work on the affected areas. Finally, use a hose and wash away any debris. Attempting to remove algae is relatively easier when the concrete surface is dry. Tackling algae on a surface that has dried out as a result of exposure to sunlight also reduces the dispersion of spores into the air.

You want to try and limit algae spore movement as much as possible. If you are not able to dry the area through sunlight, you can attempt to dry with a heater or a fan.

Once the area is moist-free, use a deck broom or a stiff push broom to scrub the area. To address particular stubborn surfaces, use a plastic scraper in addition to the brush.

TIP 3: USE A PRESSURE WASHER

A pressure washer directs a stream of water through its nozzle and onto the surface. Selecting the correct nozzle ensures that you achieve a fast and effective removal process with no damage to your property. Pressure washers can be bought, borrowed, or rented. All you need is an outdoor connection to water and power.

You’ll want to ease yourself into it if it’s your first-time pressure cleaning. If you are not sure of what kind of water pressure the device ejects, start at a distance to guarantee that you do not damage the surface. 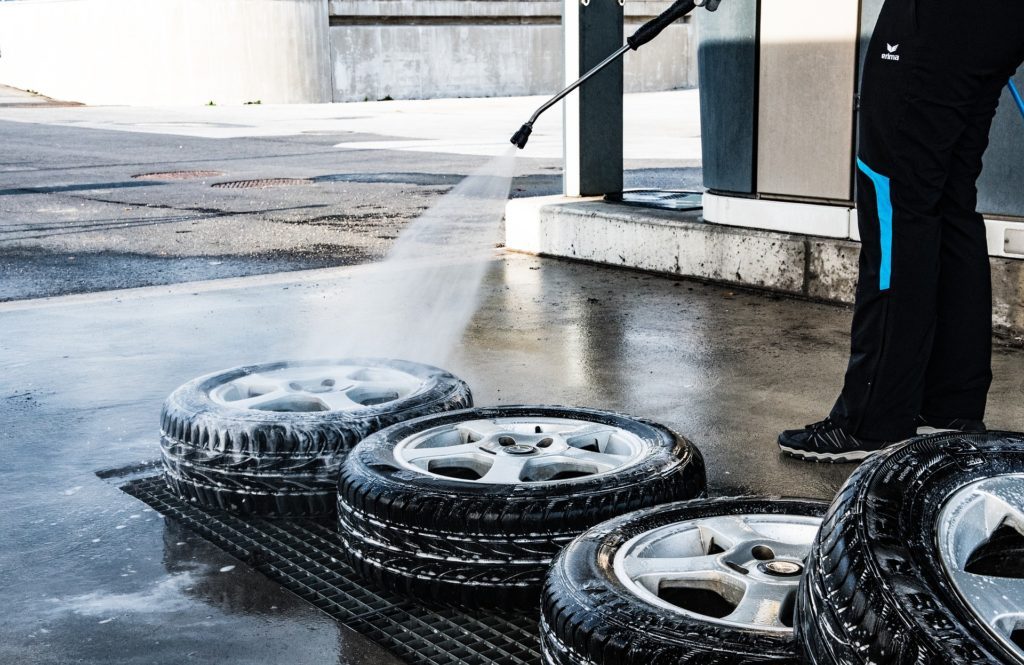 As you blow the algae off the concrete, suck up any wastewater with the vacuum or sweep the water into a nearby sump pump. 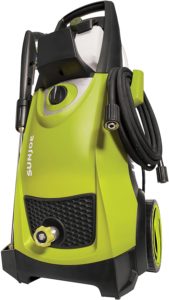 Steam cleaning can kill algae and remove it from concrete. Load water into your steam cleaner. Allow the machine to warm up, and then blast the algae with spurts of hot steam. Once the surface has been thoroughly steamed, scrub the area with a brush and finally rinse the area with clean water.

Remember to wear protective shoes and clothing and avoid direct contact with the steam as it can cause burns on bare skin.

TIP 5: USE BLEACH OR VINEGAR

Oxidized bleach immediately starts to kill algae cells once it comes into contact with it. Bleach, however, should not be your first option, especially if the area you plan to rid of algae is near plants or grass.

Bleach can have a tremendous environmental impact and can even change the color on your bricks and concrete. Before spraying a large surface with it, test this option in an inconspicuous area.
For each gallon of water, mix a cup of bleach. Use a scrub brush to scrub the mixture into any algae stains. Wait for 10 to 15 minutes before continuing. Rinse the concrete clean with a hose. If bleach or vinegar does not work, find effective commercial solutions at your local home improvement store. Search for simple deck or patio cleaning products if your algae problem is still mild. Opt for a mold stain remover if your concrete has been stained from algae. With most of these products, all you need to do is spray the area, wait for 10 to 15 minutes to allow it to seep in and kill the algae. Scrub using a deck brush, and finally rinse the surface with a water hose.

Algae removal is a tedious process that requires a lot of patience. These tips mentioned above will help you get rid of green spots on your beautiful concrete, giving your home a fresh and clean look.

To prevent future algae problems, make sure that the affected area has proper ventilation and can be dried out regularly. Prune overhanging shrubs or trees, create drainage pathways to avoid pooling water, and move the patio furniture around every few weeks. Do you have mold growing somewhere in your home and don’t know... How To Clean Glass Top Stove How To Clean Microfiber Couch

We all know that feeling. You’re relaxing on the couch after a... Stainless steel appliances have been a popular choice amongst homeowners and restaurant... Let Us Know What You Think

We strive to provide the best service possible for our clients.